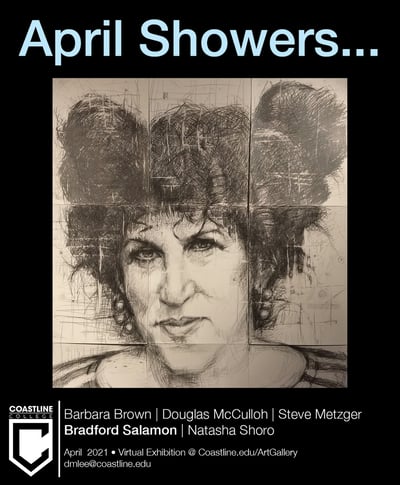 Who said you couldn’t do fun things during COVID-19? Thanks to Coastline College Art Curator David Lee, people everywhere can experience and enjoy Part 1 of the April Showers (bring May Flowers) art exhibit. From now until the end of the month when May Flowers will start, expose yourself to the beautiful works of five local artists in Coastline’s April Showers art show. 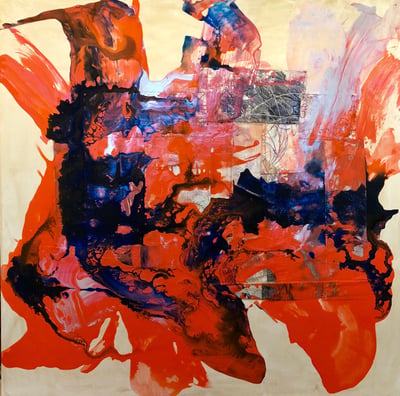 What is the April Showers Art Show?

The April Showers art show is an event created by David Lee in which he curates art from artists in the area. Normally, there would be regularly scheduled art shows displayed at Coastline’s Newport Beach campus, but this year, David Lee has had to get more creative. April Showers loosely focuses on hardship, struggle, and perseverance, which we’ve all felt in one form or another during the past year.

In a normal year, David Lee is able to take time to build a show, which usually takes a year or two. Because of COVID-19, there are more road blocks and hurtles to putting a show together, so in the case of the April Showers show, it’s more of a pop-up exhibition. This is David Lee’s way to check in on what artists are up to during the pandemic while simultaneously sharing fine art with the community. 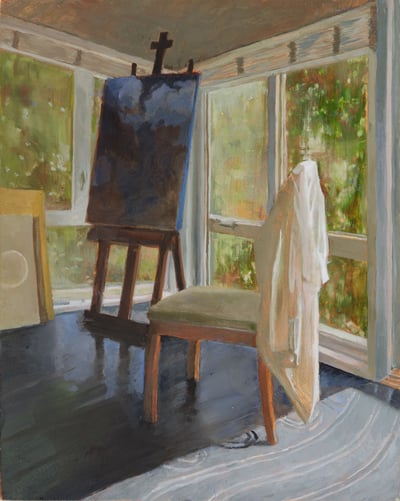 How Can I Experience the Art Show?

Thanks to the normalcy of technology, everybody can experience April Showers virtually through Coastline’s Art Gallery Blog and Virtual Exhibition. The Art Gallery Blog specifically highlights each individual artist featured in the April Showers art show (and more artists from past Coastline art shows). The Virtual Exhibition (which is really, really cool) is a chance for people to walk around a digital gallery room to view the art on the walls from their home computers. Upon entering the Virtual Exhibition, instructions on how to walk around using your mouse and keyboard are presented, letting you get the experience of physically being in the art gallery without actually being there. While it’s not as immersive as visiting an art gallery in real life, the Virtual Exhibition option is perfect for the pandemic.

Like I mentioned before, there are five artists featured in the April Showers art show. As most artists go, each one of them is unique, adding their own creative flavor to the exhibition. Each featured artist is tied to the Coastline art gallery from past experience participating in one form or another. From drawings, paintings, and photography, there is an excellent blend of artistry in each piece. 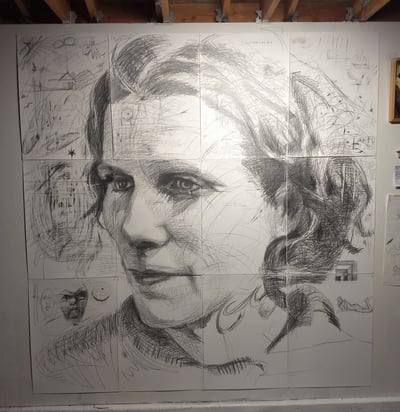 From working as an official artist for the Grammy Awards in the 1990s to being featured in various solo and collaborate art exhibitions for thirty years, as well as performing lead guitar and vocals in dozens of punk rock bands, its not a stretch to say that Bradford Salamon is the creative type. His most recent work that is featured in the April Showers show are pencil drawings of women that he primarily drew with his left hand, as his right hand was injured. His aim for these drawings was to make the pieces hard to read at first, making the viewer “get up close to see what's really happening and then stand a good distance away to experience a more overall sensation”. 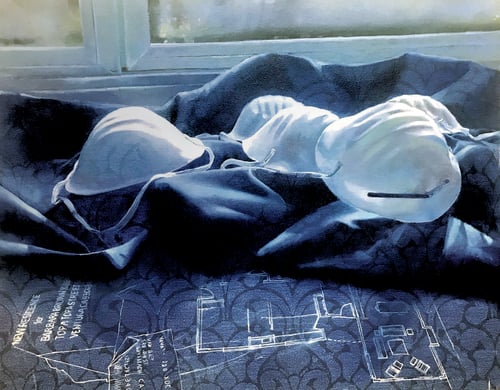 Barbara Brown’s most recent work definitely earns its place with the rest of the stunning pieces of art in the April Showers exhibit. Her experiences of turmoil started early when her home was lost to the Thomas Fire in 2017. Restarting her life by building a new home in the midst of a global pandemic has bled its influence into Barbara Brown’s work. But, instead of focusing on hopelessness, lose, and endings, Barbara Brown’s showcased work looks to “peace and tranquility (,) … beauty and quiet peace” during trying times. Her Masks II illustrates deep personal scars with dual meaning. The masks represent both construction masks worn by those rebuilding Brown’s home and the masks worn by all to prevent the spread of COVID-19, but underneath the masks are plans to rebuild, plans for a brighter future. 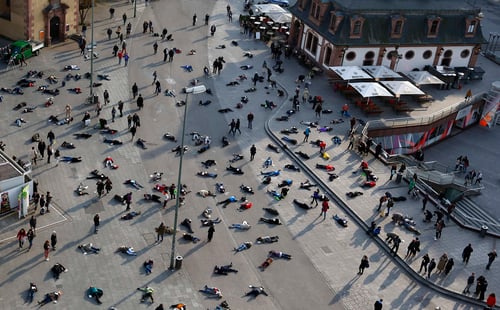 Douglas McCulloh is an experienced artist, curator, author and most notably, photographer, having featured work in over 250 exhibitions in London, Beijing, France, Italy, Mexico City, Barcelona, Los Angeles, Florida, New York, and many, many more places. His recent fascination is with fauxtography, which is the way in which photography lies. Unlike paintings or drawings, people are keen to believe photography as evidence of the truth. The two pieces submitted to the April Showers art show from Douglas McCulloh are “Eclipse Cross” and “Covid Deaths in the Streets”. When I first saw “Covid Deaths in the Streets”, my heart pinged with pain and sadness, as I instantly believed the people lying dead were victims of COVID-19. According to Douglas McCulloh, this photograph was taken in March 24, 2014 presenting an art project where participants laid down “in memory of inmates of the Katzbach concentration camp who were forced into a death march to the concentration camps of Buchenwald and Dachau on March 24, 1945”. This goes to show how easily photography can be rebranded and sold as factual truth, something we all need to be cautious of in the digital age. 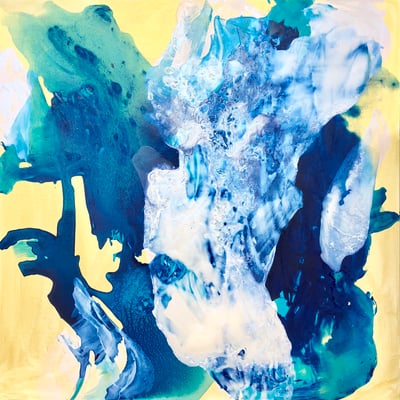 The work that I was immediately drawn to in the April Showers art show was Natasha Shoro’s. With a deep connection to Earth and her elements, Natasha Shoro uses her childhood memories of traveling the United States, Europe, Africa, and Pakistan in her works today. Her three pieces called “From Being to Becoming” feature abstract colors, washing over canvas in watery wonderment. In Natasha Shoro’s own poetic words, “Art to me is a daily practice. … Each day I reflect and find myself inspired by the gift of life. My love for nature has led me to live in the moment and thus be aware of my inner being and emotion”. 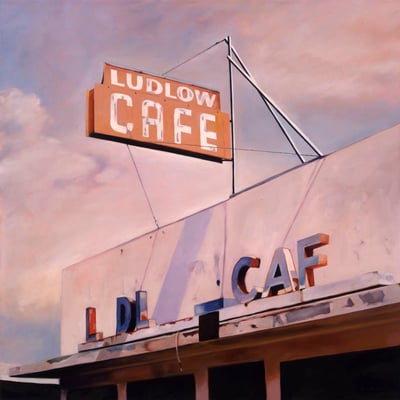 Steve Metzger has spent his spare time during this pandemic taking photographs and then painting those photographs. He started painting when he was a sophomore in high school and continued his education through Cal State Fullerton, which he funded all by himself by working nights as a musician. Steve Metzger paints things that he’s interested in, and during the pandemic, that has reflected to be images of societal scraps like junkyards and run-down cafes. The first four or five times I looked at the Ludlow Café painting, I thought it was a photograph. Steve Metzger has a rustic, “the way things were” style to his paintings that even makes me, a college kid born in 1997, nostalgic for the old days. 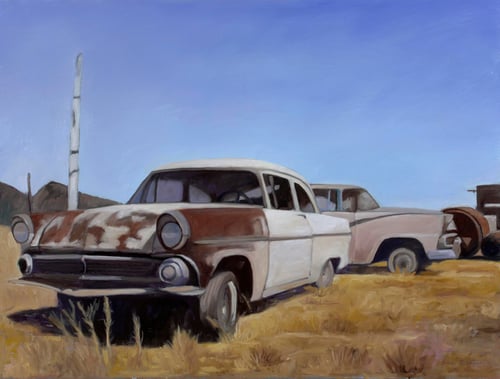 David Lee has done a fantastic job curating an engaging and diverse set of artists for the April Showers art show. In his words, he hopes everyone will “click through on links, investigate the artists, and get lost into how, why, and where these artists make art”. I did this while researching for this blog (and because of general interest in the art show) and I was consistently surprised when learning more about each artist. The art work took on new depth and meaning after I discovered the story behind the artists, and I’m extremely grateful for that. Check out the April Showers art show while you still can and then check out the May Flowers in a month!

Express yourself! Meet this week’s Teacher Feature: Natasha Shoro. She shares with Coastline the...

My extended conversation with Timothy Clark, world-renowned painter and a former Coastline...

Recent and Upcoming Movies and TV Shows Based on Video Games

With movies and tv shows adapting video game plots, it’s no secret that video games are in the...