Are you curious about the world of esports? You definitely have seen the term used a lot lately. It's buzzing, it’s everywhere, and yes it's here to stay - for good! Esports is the combination of many things that include: competitive gaming, entertainment, and content creation. I’m here to break the news that worlds have collided;  entertainment and gaming are now best friends and they are riding into the sunset together. Coastline College has embraced esports with open arms with its esports club. Take a look at the collegiate esports scene its booming, with universities across the country implementing esports teams and clubs. The club was created in 2020 with the goal of building an ecosystem of students interested in esports . The club has meetings going throughout the semester. In addition to the club meetings we also have a special Smash Tournament on October 30th! Before, I joined Coastlines esports club, I became interested in esports from watching some of my favorite Call of Duty players  Now, I am a part of an exciting and growing esports club at Coastline College. All students at Coastline have a chance to get involved with esports. I know exactly what you are thinking..”its just video games, who cares? It sounds crazy, but it's highly entertaining, funny, educational and yes - it's awesome playing and competing with other like minded individuals. The Coastline esports club is gathering momentum and speed as its members guide the club. Today’s inside edition of the esports club will give readers a look at the esports club and its members!

I interviewed George and Sheila, members of the Coastline esports club. George serves as the Valorant team captain and Sheila is the president of the club. George is a highly talented Valorant player who has climbed the ranks in game. Currently George is at the immortal rank, but his aim is set on making it to the highest level of the game. Dare I say, the Radiant Rank - the rank where champions are born and legends rise from the ashes. Sheila serves as the president of the club at Coastline and is an avid Rainbow Six Siege player. Sheila has been an influential and excellent decision maker for the club. On a more academic note, both George and Sheila excel in their academic courses at Coastline. It was time to give these students the spotlight. Without further ado the following conversation took place!

How long have you been students at Coastline College?

Sheila: This year marks my 3rd year as a Coastline student.

What are your majors?

George: I got my AA earlier this in liberal arts mathematics, hoping to transfer to obtaining a mechanical engineering degree!

Sheila: I am majoring in Health and Fitness, while also enrolled in OCC for a Kinesiology AAT.

How did you get interested in gaming and esports?

George: I enjoy watching my favorite games being played at the highest levels, I can also compete at somewhat of a high level and I love competing so it just made sense for me to get involved!

Sheila: Gaming is an outlet for me, but it also provided me with the opportunity to connect and meet new people. My online group of friends grew from 5 to around 60-70 people. This is simply based off of my Discord friends list though, so there's plenty more people I play with. I became interested in the esports world much like anyone would be interested in a sports team. You want to see your team win, you want to see them succeed and grow and grab that championship title. Gaming has become a huge part of my life, where it helps me connect with others over the same topic - the game itself and gaming in general.

How did you hear about the esports club?

George: I got an email in my student email about a year and some months ago about how coastline is launching an esports club and was instantly interested because I think it's amazing that schools are encouraging and promoting gaming instead of shunning it!

Sheila: My friends and I have long talked about starting an esports club, but I was naive and was scared to start the club. So my friend founded the club and I joined to help the board. They were unable to continue leading the club, so I was nominated to step up and take their place. I am proud to continue what my friend has started, and I am looking forward to see it grow upon its foundation before I transfer.

Sheila, How can fellow students find out more about our club?

Sheila: You can always go check out https://www.coastline.edu/esports to see our page! Here you can find our club membership form, list of events, details about the club, blogs on the club, and our social media. And our club email is also listed, so you can inquire about any questions that haven't been answered yet. 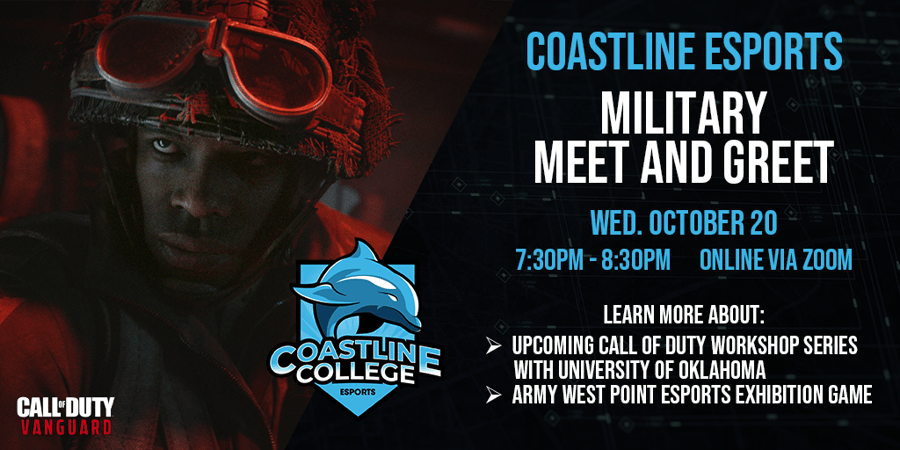 What do you think is in store for the future of the esports club here at Coastline?

George: I hope many great things will be in the future and I strongly believe there will be, the bigger the club gets the more opportunities the students can have!

Sheila: With the direction that we are going, we are definitely looking towards creating an environment that helps everyone to participate in the scene of esports, whether as a player, team manager, production, casting, or simply a supporter. This year we are looking towards working with other clubs and hosting more events, as well as forming teams that will play competitively and casually amongst themselves.

What is your favorite game and favorite food?

George: Favorite game is Valorant hands down. Favorite foods will be Chinese food and sushi!

Sheila: My favorite games are Final Fantasy XIV and Rainbow Six: Siege. My favorite food.... I love food, but if I had to choose, it would be Korean BBQ and Sushi.

Sheila, what do you envision for the esports club in the coming year?

Sheila: This year we're looking to help provide more opportunities for those who want to be involved in the esports community as well as form teams that we can compete in tournaments with. We are also looking to create teams that can play casually, and perhaps start up in-house games amongst ourselves.

George, I have heard you are the team captain of the Valorant team- and the team is looking for players... How many players are needed for the team in order to compete?

George: We currently have 4 players and are actively looking for more CCC students who play Valorant and are interested in competing and representing our school.

Do you have plans to continue being involved with esports when you transfer?

Sheila: I definitely want to continue my involvement in esports beyond Coastline. How I will do it is still a question I've yet to find an answer to. But I definitely look forward to doing something related to the world of esports when I transfer and even after I graduate.

George: After transferring, Yes I would love to stay involved with esports and accept whatever opportunities that present themselves.

Sheila, what advice would you give to girls wanting to get involved with esports?

Sheila:  Just go for it. Find friends, make new ones along the way. The world of esports is so big, there's so much you can do, even if it isn't gaming itself. You can always cosplay or look into working within the corporate part of an organization. There's many spots on stage, off stage, behind the stage of the esports world that you can get involved with. If you're looking for someone to start playing with, you can always tune in to the esports club, we have plenty of people looking to play with someone else!

George, how long have you been playing video games for?

George: I've been playing video games as far as i can remember, i believe i started since the original Nintendo Super Famicom, then it was playstation 1, so i was under 4 years old when i started gaming.

Sheila, what attracted you to gaming and esports?

Sheila: When I first started playing games, it was League of Legends. That's all I knew. I don't really think I would consider League as what drew me into the world of gaming and esports, but it definitely got me started learning about the world of esports. League of Legends is a huge game, and I learned about esports and teams and everything they do beyond the game itself through the Tournament Splits. After playing LoL for roughly 5 years, I felt like I wasted my time on one game instead of many. So with the help of my friends, I've learned to open up to playing and learning new games. You are never good at a game the first try, it would be awesome if you did, but getting better at a game takes practice. Since moving away from League, I've played many various other games. Big names being Tom Clancy's Rainbow Six: Siege, Final Fantasy XIV, Apex Legends, and Destiny 2. As well as small games like Among Us, 100% Orange Juice, Human: Fall Flat, UNO, Headsnatchers, and more. I also have a handful of other games that I've yet to try like Ark: Survival Evolved, Final Fantasy X/X-2 Remastered, and NieR: Automata, Rocket League. I think the biggest draw besides the many names I could pick from and try to play is the community in which all of these games are surrounded by. The world of gaming provides many opportunities for making new friends and learning new things. I've made a lot of friends through the games I play, and learned a lot from them like life lessons, foods to try, and different perspectives.

George, what is your current rank in Valorant? And what advice would you give to new valorant players?

George: I’m currently immortal ranked. My advice would be: don't get overwhelmed with all the different aspects of Valorant, just learn as you go at your own pace, if you want to get better i would say focus on making your sensitivity optimal and not comfortable!

Overall, the direction of the esports club here at Coastline is lead by a smart group of students. Exciting events are on the horizon for the Coastline esports club! The club is having a Call of Duty event on October 20th, and then a in-person event (yes!!! In-person) Smash Tournament on October 30th, at our Westminster campus! George and Sheila, have done great things for the club! My fellow club members are paving the way for future Coastline students wanting to get involved with esports. If you would like to stay up to date on Coastline esports check out our instagram! You can also always find out the latest news, including how to join the club, at coastline.edu/esports!

Dr. Tanya Hoerer has been a Biology instructor for 20 years. In celebration of Earth Day, we spoke...