In a full & interesting life, one thing has stayed consistent for Dr. Sharon: teaching & being there for students.

Dr. Sharon Chard-Yaron has always wanted to be a teacher. But not just any teacher. She “wanted to be a cool teacher.” What does that mean? It means a teacher who inspires their students, but also knows their students. There’s nothing less cool than not caring or being informed about the people you guide and interact with, online or in-person, every day. “Having a personal effect on someone’s life” as a teacher, that’s cool.

An example of an uncool teacher: Mrs. Musan, Dr. Sharon’s third grade math instructor. Mrs. Musan “beat your hands with a ruler” if you missed your multiplication tables. Ouch. Sharon chuckles as she tells this story, acknowledging that this kind of behavior wouldn’t fly in a classroom (or probably anywhere) anymore. But back then, parents would simply say “‘the teacher is always right.’” That environment in third grade instilled a fear of math in Sharon that persisted all the way to her first statistics class for her Doctorate.

As a kid, Sharon was inspired by these kinds of teachers, the hit your hand with a ruler kind, and by the kinds of teachers who were nothing like that. That she was inspired by the worst as well as the best makes sense when you meet Sharon. And it makes sense when you consider what teaching means. Education is about improving. Sharon saw that education, that teachers, could be better; that classrooms didn’t have to be places where children felt afraid or pressured. And so she resolved to become a teacher, a cool teacher.

Sharon received her Bachelors of Science in Education, focusing on development. She spent five years as an elementary school teacher before going back for a Master’s in Counseling. Afterwards, she moved to Israel, where Counselors also have to teach, which is “the best of both worlds,” says Sharon. Later, she returned to the U.S. for her Doctorate of Education (EdD) in Curriculum and Instruction. 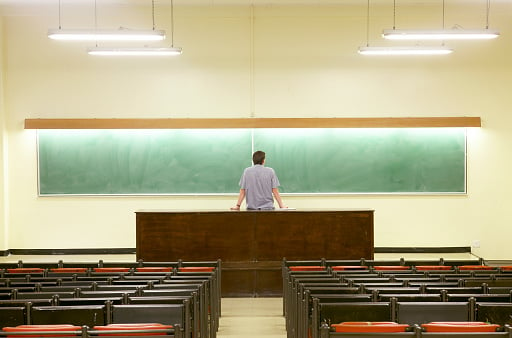 But it was while she was in Israel that she says she encountered the greatest example, in her life, of the impact of teaching. One day she was sitting in her counseling office; she received a phone call, directing her to come downstairs. She thought maybe she was in trouble, but when she arrived she was surprised to see a group of Vietnamese children waiting, uncertain, unsure, unsettled.

During the War in Vietnam and the broader conflicts in that region in the 1970s, millions of refugees fled persecution and violence. Israel accepted a number of them, estimates range between 100-200. Without a doubt, these refugee kids were frightened. Here they were, in a strange country, a place that could not be more different than the only homes they’d known.

They obviously didn’t speak Hebrew, Sharon points out, just Vietnamese, English, and French. But most of the staff in the Israeli school didn’t speak French and not nearly enough English to effectively teach. Sharon laughs as she admits that her French was also not stellar, but at least she had her English down pat. She taught the kids as well as acted as their counselor. Most of the Vietnamese refugees in Israel eventually came to the United States or went to France, Sharon says, but a few did stay in Israel. What she realized then, from that experience, is the potentially singular impact a teacher can have on student success.

Now, Sharon leads Coastline’s TEACh3 program, which is designed to educate future teachers. There’s a teacher shortage in California and in fact across the United States. A program like TEACh3, says Sharon, is designed to help the people who want to be teachers, but can’t necessarily attend classes in person. It’s organized across the Cal State University system alongside California community colleges. 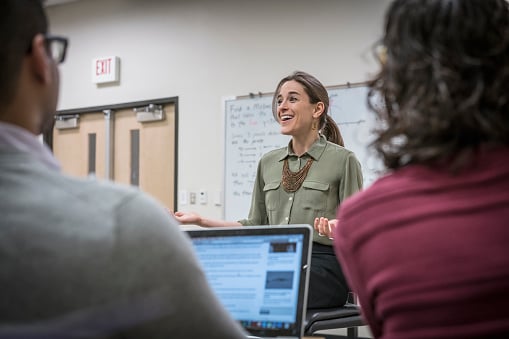 “It’s a unique program” says Sharon because “not everyone comes in at the same place.” Some students are missing fieldwork, others a course here or a course there. The goal of TEACh3 is to find a way to educate the educators. “Teachers are the first responders to children after their parents,” says Sharon, highlighting the importance of teaching teachers to be compassionate and thoughtful to their own students.

Coastline’s Teach3 serves as an asynchronous resource for those who want to learn on their own time or have job or family demands that make it hard to attend classes at specific times (whether that’s in person or online). Sharon points out that remained true during the pandemic where schools shifted online; Coastline’s TEACh3 program remained asynchronous, which means students don’t have to look at “20 faces the size of postage stamps” on Zoom.

From the start of her career, Sharon was an advocate of learn-by-doing. She notes that for a long time in education students were simply droned-at all day or given a book and told to read it. Let’s call that the uncool method, pioneered by the likes of ruler-smacking third grade math teachers. When it was her turn, Sharon was part of a wave of teachers who brought the world into the classroom and the classroom into the world. For example, having students in a history class put together a museum display.

Even in the world of online education, Sharon continues to design curriculums with a high degree of interaction and engagement. She offers students multiple activities to choose from to illustrate the class points and to accommodate those who learn best in different ways. Sharon pointed out a quote she uses a lot in her teaching, which has been misattributed to Confucius but likely originates from China nonetheless: “I hear, I forget. I see, I remember. I do, I understand.” In 2021 she received a Teaching Excellence Award for her continued work at Coastline.

For Sharon, being a teacher means taking an interest in her student’s lives; she’s interested in them as people, wants to help them in the ways she can and makes sure they feel supported, asking them how they’re doing and responding to emails late at night if she can. During the pandemic this became even more significant as people struggled, but it was true before as well. To the goal of wanting to be a ‘cool teacher,’ a teacher radically different from the kind with rulers clenched in fists waiting for children to mess up, it’s clear Sharon has succeeded.

Have you considered a career in teaching?  Now is the time to act! California is in the midst...

This week is National Teacher’s Appreciation Week. Please join me in celebrating and appreciating...