My extended conversation with Timothy Clark, world-renowned painter and a former Coastline professor; we talked about watercolors, why commitment matters in the arts, poetry and more. 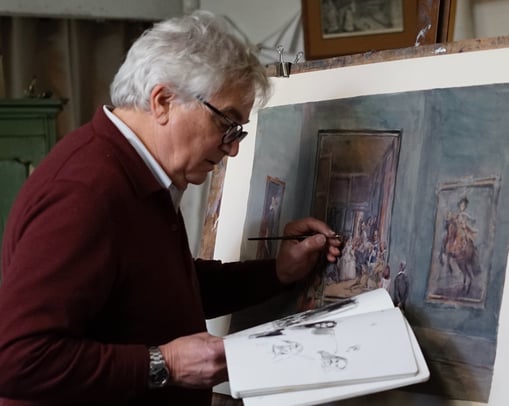 The first time I spoke with Timothy Clark I called him ‘professor.’ It seemed appropriate, considering he’s taught at some of the finest schools in the world, including Yale’s Graduate School of Architecture in Rome, the University of Hawaii, the National Academy, and Coastline College, where he was a founding faculty member in 1976. However, as soon as I said it, Tim Clark laughed and replied “professor? No one’s called me that in 20 years.”

I could then faintly hear Mr. Clark’s wife, Marriott, also laugh in the background, though I got the immediate sense that neither were laughing at me; rather they were chuckling at each other and themselves, and inviting me to join in. And that’s pretty much how the rest of our conversation unfolded.

Timothy Clark’s paintings have been shown in galleries and museums around the world, including an upcoming Fall 2021 exhibition at Howard University. Furthermore, his paintings are in the permanent collections of the Smithsonian’s National Portrait Gallery, the Butler Institute of American Art, the Museum of the City of New York, and the Farnsworth Museum in Maine. Our interview was only supposed to last 30-40 minutes. Instead it spread and blossomed, like morning light filtering through church windows in one of Clark’s vivid watercolor paintings, into a two and a half hour conversation.

Clark couldn’t say whether being surrounded by so much nature impacted his art, but it was clear from listening to him that there was an imprint. It’s also clear when you see his still-life paintings, including a charmingly ripe one titled “Summer Lemons,” in which the textured greens and browns of the leaves obscure, but don’t overwhelm the succulent yellow fruit (if I didn’t know lemons were so sour, I’d plunge my teeth right into the painting).

“Summer Lemons” and much of Clark’s oeuvre contains what Clark’s artist friend Donald Holden called “sprezzatura,” an Italian word for making the difficult look easy and doing it with a “particularly fluent, graceful, and refreshing” amount of style in the process. The sprezzatura affect is visible in another of Clark’s paintings, “Balboa Sloop.” The calm, rippling water of the marina serves as an apt metaphor: flowing gently, concealing enormous strength and technique.

Clark knew from an early age that he wanted to be an artist; when he was nine he took a drawing class at a local museum. He was a “stand out” in high school, not just because he was naturally talented, but because he worked and worked at it, and still does. Marriott half-jokingly said that when Tim is painting “it’s not safe to be around” him. And I was surprised to discover that he had spent the entire time we spoke drawing in his notebook.

He went on to study at Los Angeles’s Art Center College of Design (now located in Pasadena), then at the Chouinard Art Institute (which became CalArts shortly after), and received a Master’s in painting from California State University, Long Beach. “I figured out, fairly soon after I got out of school, that I may never really sell a painting,” Clark said (he’s since sold many). But, to the question ‘what do you want to do with your life then?’ his answer didn’t change: “I think I just want to paint.”

He also stressed that artists, like any other creative person, whether that’s writing, sculpting, or playing basketball, aren’t born. Clark simultaneously “stands on the shoulders” of the masters, like Winslow Homer, “and forges ahead.” He said, as he learned and practiced techniques in and after college, that his individuality began to “leak out,” like the dusk light over the dome of St. Peter’s Basilica in his painting “Nessun Dorma." The purple, blue, and green shadowing over the Roman rooftops converge around the dome, highlighting both the might of the church and the grander, more awe-inspiring might of nature itself captured by those brushstrokes.

To this author’s eye, it is Clark’s paintings of the everyday—some would say mundane—scenes that truly hold your attention and make you hunger to see more. I was drawn to a painting of a 1935 Chevy, titled “Return to Rust,” as it seems to fade literally into the background of a Maine afternoon.

The “For Sale” sign in the window reminded me of the apocryphal Hemingway six-word story: “For sale: baby shoes, never worn.” You get the sense that the car put in many miles, took people and things to many places, was repaired many times. The stories and lives that were lived in that Chevy are unimaginable, and yet Clark seems to render them visually, putting it all out on the paper.

Dr. Lisa Farrington, author, art historian, and curator at Howard University (where Clark will have his Fall 2021 exhibition), wrote in the eponymous book about Timothy Clark that his work “embod[ies] the post-modern concept of art-as-idea. These are no ‘pretty pictures,’ but diffidently profound documents of human existence.” In the Fine Art Connoisseur article, Dr. Farrington said that Clark gives his still-life subjects—hoes, shovels, awls, the elemental tools of craftsmen—“something akin to a human soul.”

His landscapes are similar, recalling poetry; for example “Maine Dusk,” for which Clark provides a lovely audio tour on YouTube, courtesy of the Laguna Art Museum. In “Maine Dusk,” the moon is a neat smudge towards the top left of the frame. The night sky is the color of smashed blackberries, seeds and all. A flock of black-capped chickadees, Maine’s state bird, dance in an imperfect sinusoidal curve around a tiny island.

After reading poetry, such as Robert Frost, to his children instead of kid’s books when they were growing up, Clark realized that he “could borrow the meter of a poem” to create the meter of his paintings; Clark partially credits that rhythm, that meter, to what strikes so many people about his paintings of inanimate objects. To give meter is to confer meaning; to lay down brushstroke after brushstroke is to make the passing, the images that float by us everyday, more permanent.

It goes without saying, but I’ll say it anyway, that Tim Clark, and Marriott of course as well, were a pleasure to talk to and with. I got the sense that they’d both rather ask me about my background, hobbies, and interests, than discuss his paintings.

He gave me advice that applies equally to painters as it does to writers. “Someday, all at once it gets hard, and that’s when you get to be a good writer.” He continued: “when it gets hard and you decide, I’m going to still do this,” even if no one ever buys your work, that’s when you’re an artist. He advocated that any artist should focus on honing their craft, perfecting the imperfect-able.

At the earliest stages of his career, Clark’s father gave him some advice too. “‘For you to get as good as you are took a lot of work. Now to get just a little bit better may take more work than it took to get where you are.’” That encapsulates an idea, a notion really, that I’ve long held onto. Making the slightest bit of improvement, the last mile in the race you might say, is often the hardest.

I told Clark that his dad said it better than I ever could, to which he wryly replied: “he didn’t say it that way. I cleaned it up.” The interview ended the way it began: with all of us laughing.

Black students and staff at Coastline talk about what Black History Month means to them, in...